Note: This is the 28th in an occasional series where I share Eagle Scout project before-and-after photos. See the complete collection here and submit your own here.

This week’s batch of 15 projects includes a memorial friendship garden, a goat playpen and a chimney swift tower for the gray-brown birds that dwell in vertical structures.

What: Tyler and his helpers revitalized the garden at Sellers Elementary School, making it much more appealing to the parents as they pick up their children. What: Jesse and his helpers installed a kayak launch at Lake Cornelia. What: Mihir and his helpers established an ADA-compliant, wheelchair-accessible pathway for New Jersey Audubon. What: Hayden and his helpers built a chimney swift tower for these vertical-dwelling birds to use to create nests. What: Julian and his helpers took an unused area of the Benson Middle School and added a pergola, picnic table and some trees for everyone to enjoy. What: Jared and his helpers coordinated the construction of a 10-by-10-foot pavilion for use at CrossRoad United Methodist Church in Jacksonville. What: Samuel and his helpers removed and rebuilt the fence around a koi and turtle pond at the Burbank Animal Shelter. What: Trenton and his helpers built two community lending libraries, enabling members of the community to exchange and share favorite books at no cost. What: Davey and his helpers built an outdoor classroom at Tayamentasachta, his school district’s environmental center. The classroom includes six benches made out of recycled pallets and a chalkboard enclosure with chalkboard and rock bed. 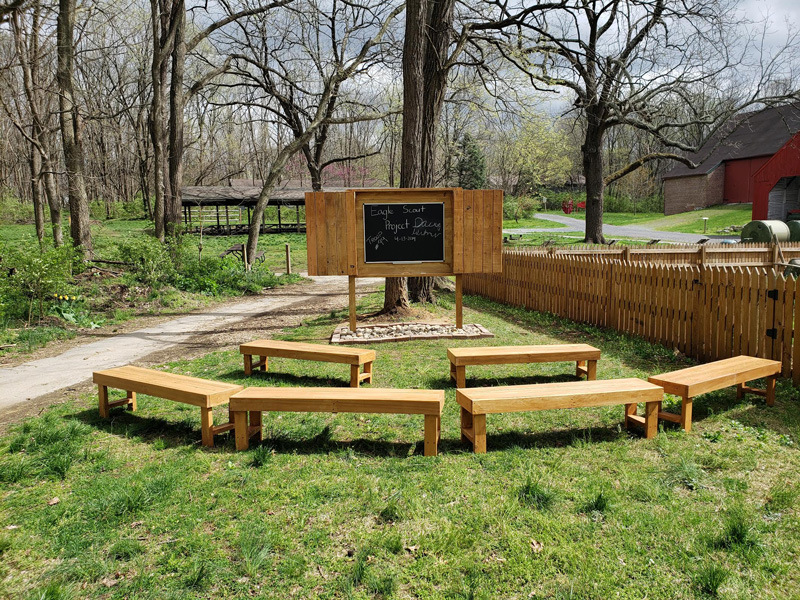 What: Nolin and his helpers replaced two run-down picnic tables with three new ones in the redwood grove at John Muir National Historic Site. What: Spencer and his helpers built an outdoor classroom, complete with an internet weather station, at Clear Creek Elementary School. What: Kenzie and his helpers created and installed a goat playpen and exercise track for the local FFA. The project included an electric spool climber, goat swing, pallet pyramid, and a 100-by-25-foot enclosed exercise track. What: Stevin and his helpers transformed an erosion-prone area into a memorial friendship garden at a local school. The garden includes friendship benches to remind all students and adults that “no one sits alone.” What: Nate and his helpers designed and built a 10-by-10-foot storage shed to house tools and materials used by his local elementary school’s community garden and science department. What: Ethan and his helpers renovated the outdoor play area of the Lawrence Arts Center preschool, constructing preschool-size furniture, including a table and four benches. About the Eagle Before and After series

How to submit your photos

The Glenn A. and Melinda W. Adams National Eagle Scout Service Project of the Year Award honors outstanding Eagle projects like those included above.