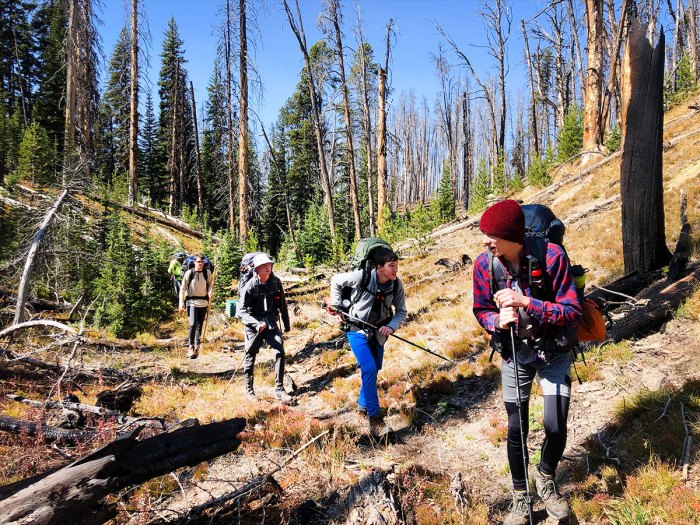 Backpacking through the remote wilderness of Yellowstone National Park, the Scouts of Troop 4900 sat down in a circle to rest. Sitting like this gave the Scouts a view of every direction. They didn’t want a bear or other dangerous animal suddenly sneaking up on them. Within a few minutes, Life Scout Miles Berry, 16, saw a bison emerge from the trees — about 50 feet from the group.

His friends weren’t alarmed. On the trail, they had seen twice as many bison as people. 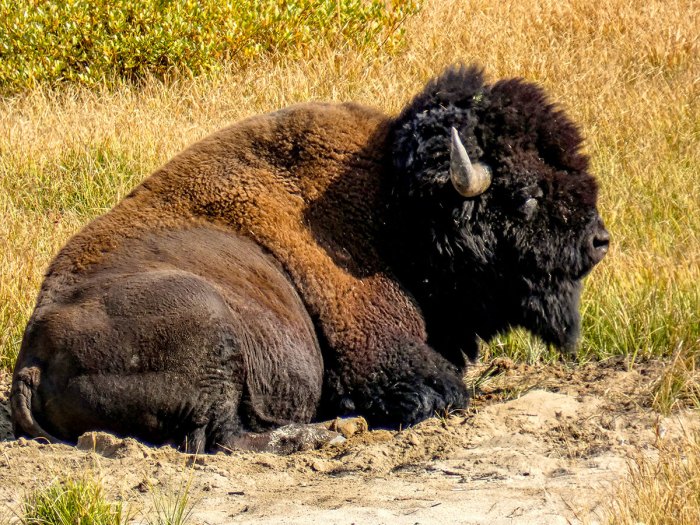 Everyone turned around and witnessed the massive woolly beast lumbering toward them. Slowly and carefully, the Scouts and adult leaders grabbed their packs and slinked farther down the trail, out of the nearly 2,000-pound creature’s sight.

The experience demonstrated the importance of teamwork in keeping everyone safe. It represented just one lesson the troop from Woodstock, Georgia, learned during its 55-mile trek.

For more than a year, Troop 4900 planned a trip to our country’s first national park. Coming from Georgia, the Scouts knew they might encounter some things they weren’t used to. So they went on a couple of practice hikes and had a gear shakedown. During one hike, they practiced stringing up bear bags and handling bear spray.

“We made sure to carry our bear spray with us at all times,” says Thelonious Coe, a 17-year-old Life Scout. 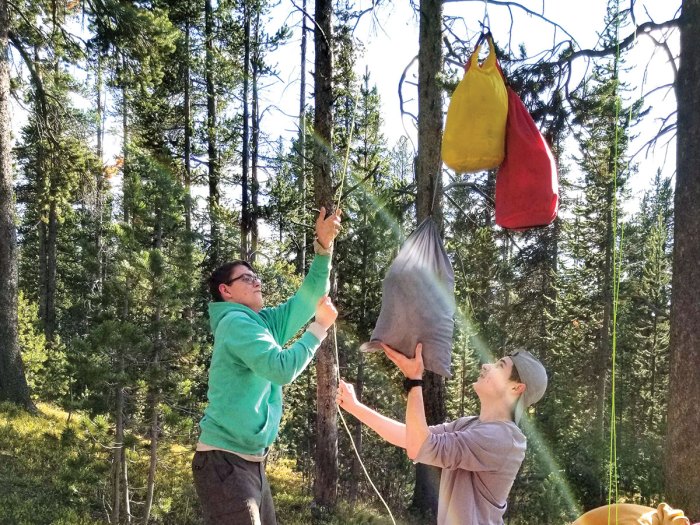 Bear pepper spray is a deterrent designed to irritate an aggressive bear’s breathing, giving you time to escape. Studies have shown it’s highly effective when discharged properly, although you likely will never need to use it. The odds of being attacked by a grizzly bear in Yellowstone are 1 in 2.7 million. Still, you should Be Prepared, especially when hiking in the backcountry.

An adult leader, wearing an orange sign that simply said “Bear,” would sometimes pop out of the woods on the practice hike and mimic bear behavior, just as a reminder they should always be alert and have their spray ready. 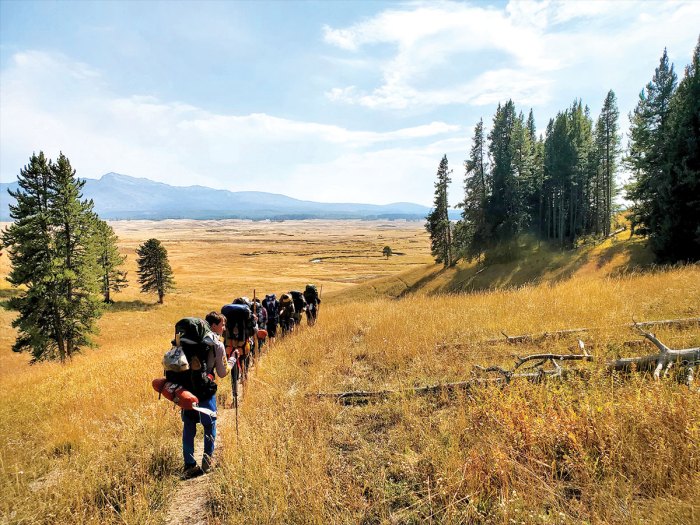 Backpacking in Yellowstone would be an adventure in itself, but the Scouts decided to add another element: BSA’s Kodiak Challenge. The Kodiak Challenge
is a weeklong leadership training course designed to enhance an outdoor trek. Each day comes with a new leadership activity followed by time to delve into lessons from that activity.

The troop’s first challenge was to set up camp without saying a word. When you’re accustomed to communicating verbally, it can be tough. Simply pointing to what you want doesn’t tell others your intention. And doing everything yourself slows down the task. The Scouts figured out that hand gestures and written notes worked well.

“It emphasized that if you can’t communicate with your group, you can’t accomplish anything else,” 16-year-old Star Scout Sean Rollins says. 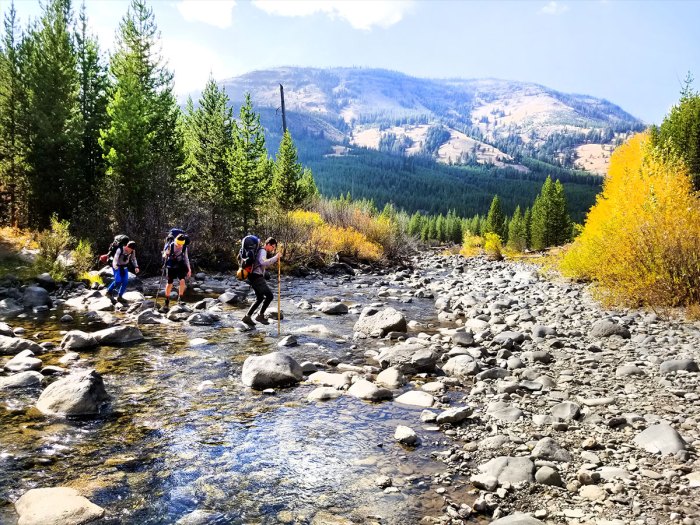 Other challenges involved brainstorming how to cross a river without getting wet — a lesson in teamwork — and discussing the values of the Scout Oath and Law.

“It helped make every day different,” Sean says. “With this, we woke up and we had a talk; we had a challenge. It made the trip more exciting and gave us more to reflect on.”

What better place to reflect than in Yellowstone National Park? 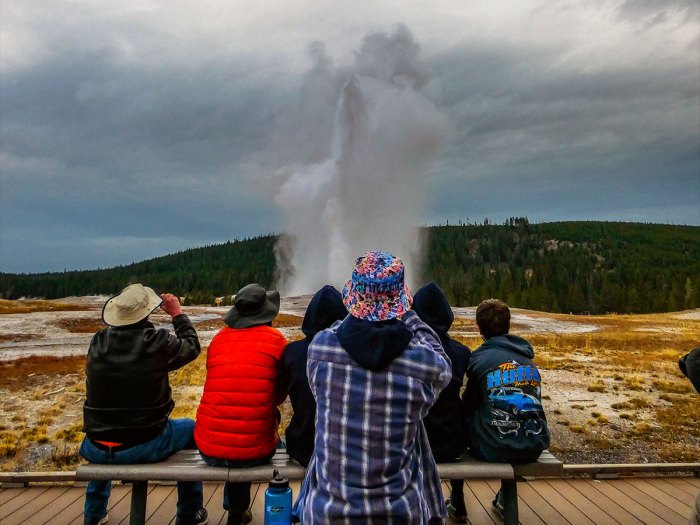 At night, the crew looked up at the Milky Way and could pick out satellites moving across the sky.

“There were a lot of satellites,” says Oscar Shetler, a 16-year-old Life Scout. “The first night, we saw well over 20.”

The Scouts also counted the wildlife they spotted during the week: 68 bison, 11 chipmunks, one snake and one squirrel. No bears, but they did find tracks. They also heard elk bugling and wolves howling. The Scouts saw only 32 people on the trail. 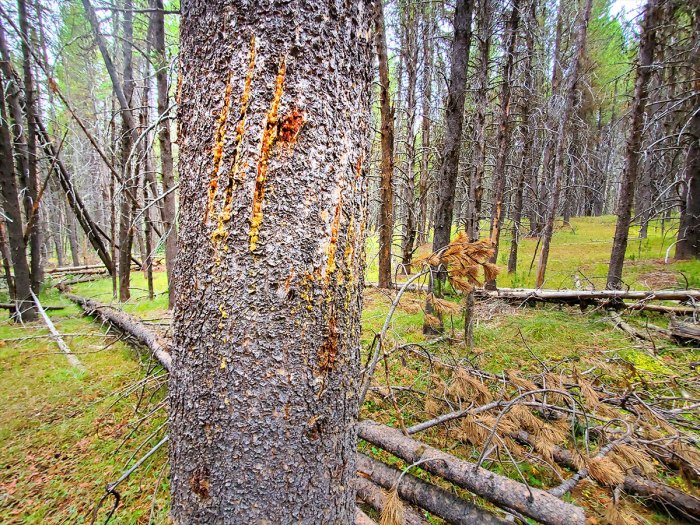 Even when surrounded by such untamed splendor, backpacking for miles can get a little tiresome.

“We’d get bored while walking, so talking gave us something to focus on,” 17-year-old Life Scout Brian Kervin says.

Conversations ranged from Scouting values to fast-food cravings to the best Star Wars movie. The consensus on the last topic: Episode III: The Revenge of the Sith. 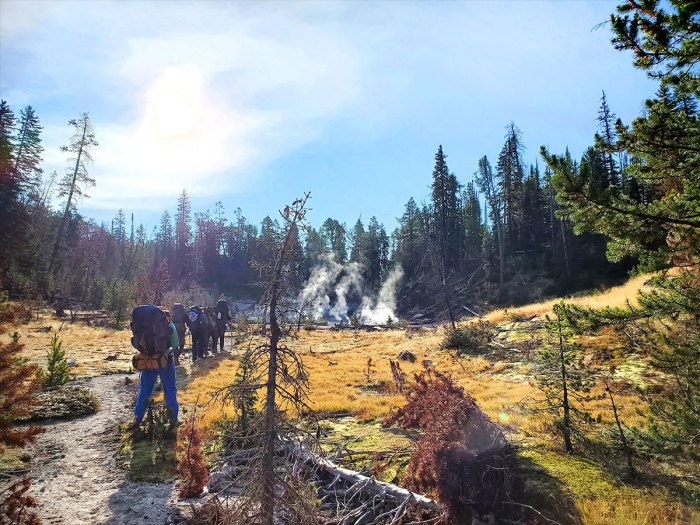 Hiking past shed elk antlers, bubbling mudpots and geothermal pools reminded the troop that they were trekking through parts of the park that most tourists never get to visit.

Adding the Kodiak Challenge to the trek enriched the entire experience. It turned into more than a hike through Yellowstone’s backcountry; it was a time to grow as a leader and a person.

“I learned more in those five days than in five years,” Oscar says.

Check out the Kodiak Challenge and other youth training courses at go.scoutlife.org/kodiak

Bison are enormous creatures. Males weigh as much as a ton and stand 6 feet tall. Yet they’re fast: They can run up to 35 mph. They’re also strong swimmers and can jump high fences.

Scientifically, the giant herbivores are named “bison,” although many people call them “buffalo.” The Lakota tribes call them “tatanka.” Native Americans relied on the animals for food, shelter, clothing and tools.

At more than 30 million strong, bison herds once roamed most of America. As settlers pushed West in the 1800s, the majestic animals were hunted nearly into extinction. Conservation efforts helped the wild population rebound to 30,000 today. About 5,000 live in Yellowstone, the only place where they’ve lived continuously since prehistoric times.