Megan Lamm stood on the shore with a curved wooden stick she found, some line, a small hook and a handful of worms. That’s all she needed to catch panfish. Well, that plus a little luck.

“We had a lot of luck,” the 16-year-old First Class Scout says. “For whatever reason, the fish were biting. We caught six.”

Scouts with linked troops 214 of Raleigh, North Carolina, not only had a good day at the lake last April, but also mastered wilderness survival skills over the weekend. A campout at Falls Lake allowed them to practice their resourcefulness — an essential survival skill. 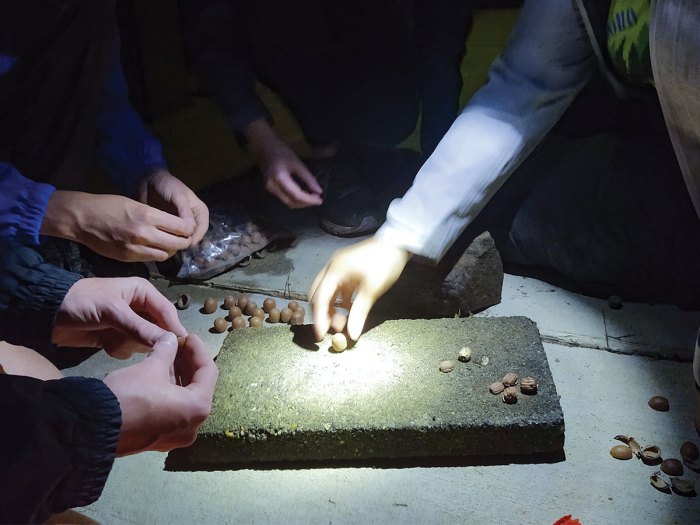 Scouts crack open acorns so they could make the insides into pancakes.

Nearly every year, the troops go on a campout during which they work on the Wilderness Survival merit badge. Those who have already earned it focus on advanced survival skills. The adults bring the survival gear, as well as a few challenges for the Scouts. This time, the Scouts had to fillet fish, build fires and make pancakes from acorns. 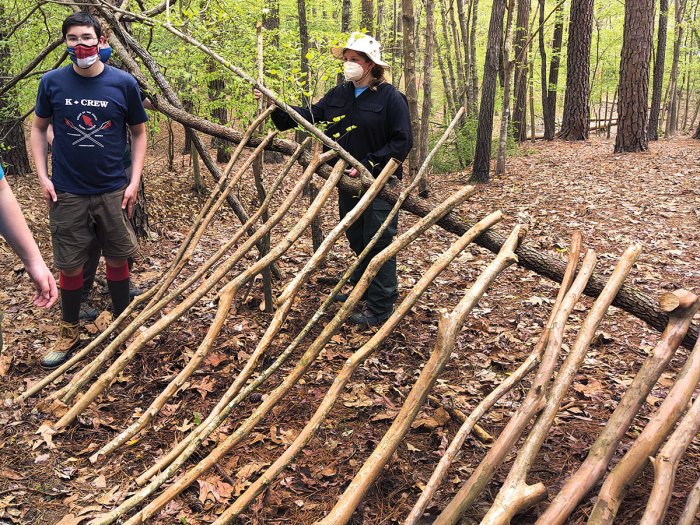 Henry Cash and Savannah Jerman make a survival shelter from sticks. Leaves and pine straw were added to the roof.

The first night’s activities, though, were interrupted by thunderstorms. Scouts set up shelters using trash bags but retreated from camp after lightning began crackling across the sky.

“After the rain came, I had to completely redo it,” says Second Class Scout Matthew Bridgers, 13. “It was definitely uncomfortable. Once the rain was over, I didn’t have as much padding as I did before.” 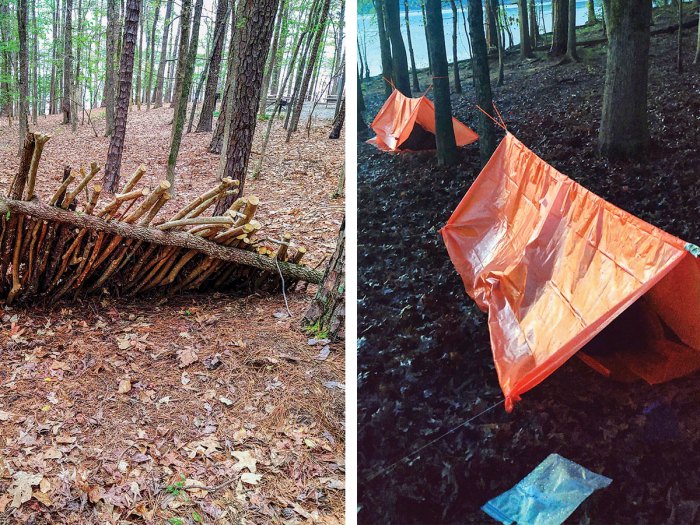 Scouts built shelters with wood they brought so they didn’t have to disrupt the environment. Other Scouts made survival shelters from plastic trash bags, duct tape and paracord.

Large trash bags can be duct-taped together and stretched over a rope tied between two trees. It’s an easy and cheap shelter that can keep you dry overnight. Place more trash bags on the ground over a bed of pine straw, and you’ve got a soft place to rest. To stake it down, grab four rocks and wrap each trash bag corner around one, securing each with string. 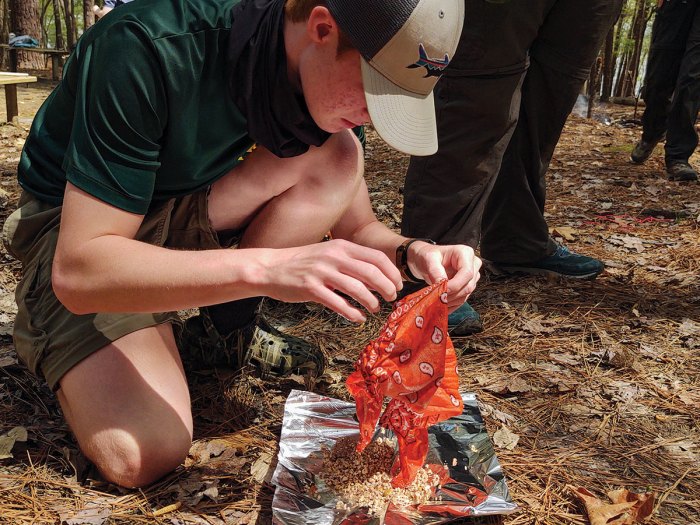 Kenneth Mabry empties ground acorns that had soaked in water to remove tannins.

Before the Scouts went to bed, they started preparing breakfast: acorn pancakes. They broke open the oak nuts their Scoutmaster had collected and ground the insides into a flour. The flour was placed in a satchel and left to soak in water overnight. This step removed the acorns’ tannins. If you’ve ever bitten into an unripe fruit and got a mouthful of bitterness, you’re tasting tannins — a compound the plant makes to deter animals from eating its fruit until the seeds inside are mature enough to be dispersed.

The next morning, the Scouts formed the acorn flour into patties and cooked them. It turned into a crumbly mess. Still, they learned a new way to make a meal from what nature provides. 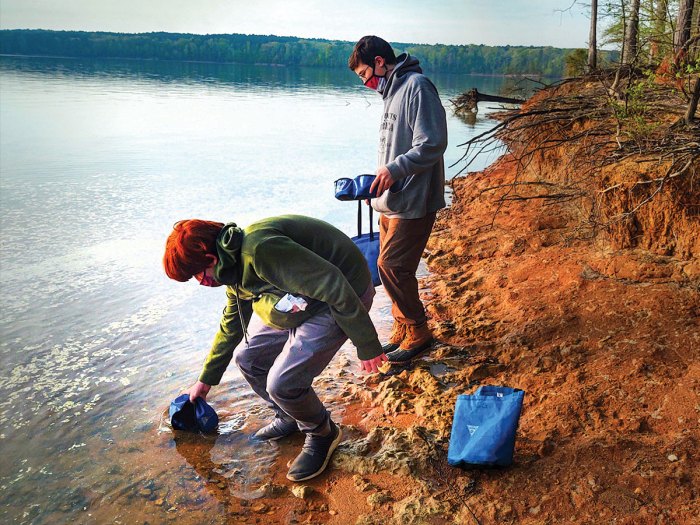 Scouts working on the merit badge had plenty of skills to master: starting a fire with flint and steel, purifying water, figuring out directions using a stick’s shadow, and making symbols to signal rescue planes. It’s a wealth of knowledge that could save your life. 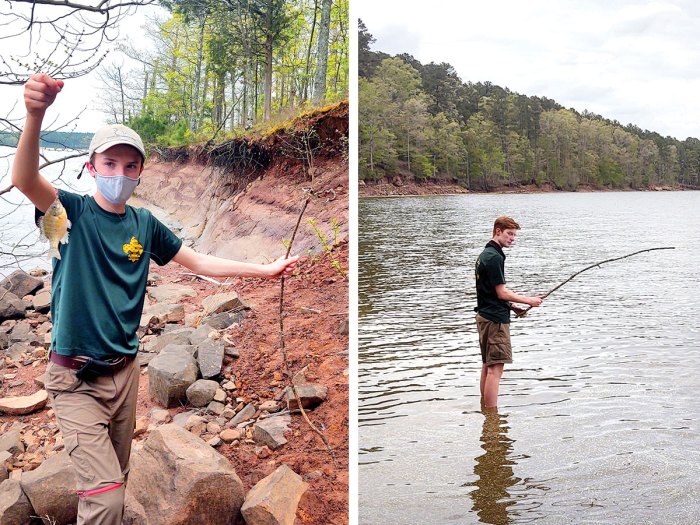 Left: Mason Carver holds up a bluegill he caught. Right: Kenneth Mabry fishes while standing in the lake.

Fishing with a paper clip — which the Scouts tried — isn’t necessarily an essential life-saving skill, but it’s a great exercise in being resourceful. Straighten a paper clip and fashion it into a hook with a pair of pliers; use a file to sharpen the end. 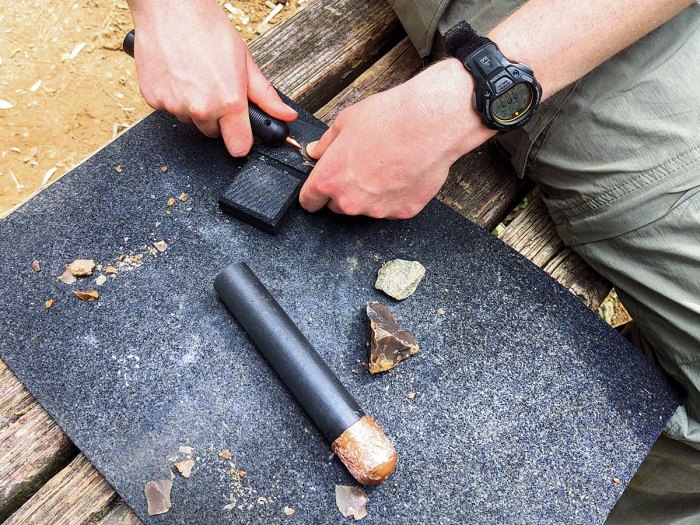 Some Scouts tried flint knapping, the art of making tools from rock.

“I definitely enjoyed getting outside,” Matthew says. “This gives me an opportunity to be rugged.” 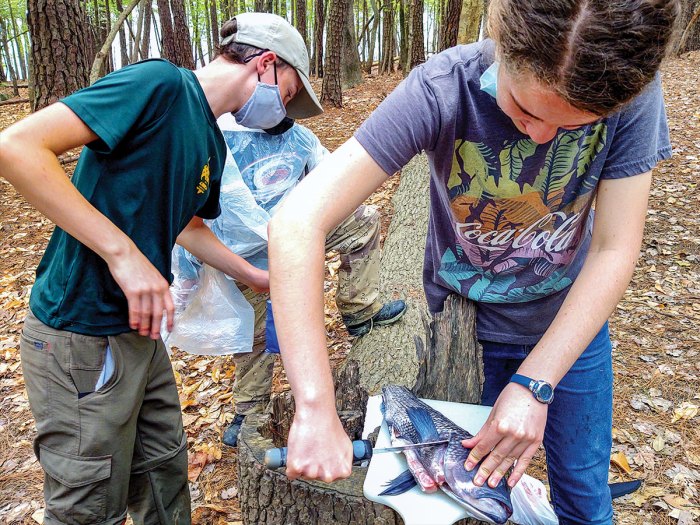 Megan Lamm cleans a fish, bought before the campout so Scouts could practice this skill.

SURVIVAL OF THE FITTEST (OF MIND)

The campout was cut short as more thunderstorms began threatening the area. By that time, though, Scouts had completed the requirements for the Wilderness Survival merit badge. More important, the Scouts received a boost to their self-esteem by trying new things, even if they didn’t turn out perfectly. In a real survival situation, positive thinking is vital to making it out alive. 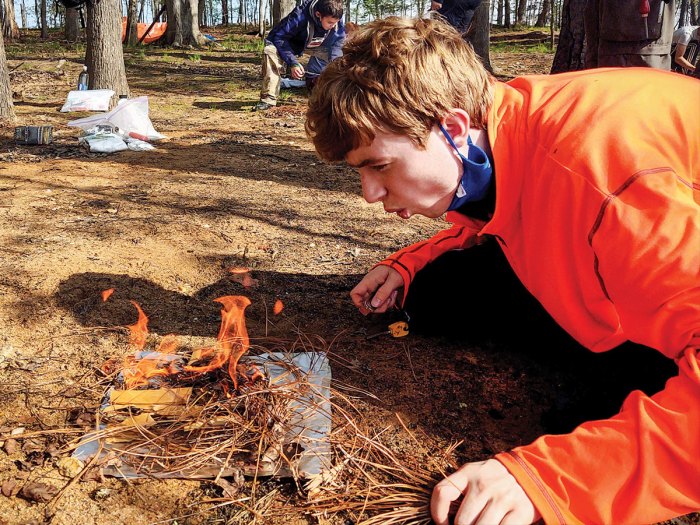 Noah Koch kindles a fire he started without matches.

Being resourceful demands positivity. If your first try fails, try again. And if that doesn’t work, think of a different way to get the result you want. During the campout, the Scouts learned several different methods for starting fires, so if one didn’t work, they had the skills for trying another. That’s also called Being Prepared.

Knowing different methods for finding or making food means Scouts don’t have to resort to buying emergency ready-to-eat meals, which they tried for lunch. To say the least, they weren’t fans of the lemon-flavored high-calorie bars.

Foraging meals from nature can be a rewarding skill. In a survival situation, though, it should be low on your priority list. Exposure to the elements, injuries and dehydration are much bigger concerns.

If you think you’re lost, here’s what you should do, in order of importance:

You need to be absolutely sure of what you’re eating if you forage something from nature. Some wild berries, mushrooms and flowers can make you very sick or even kill you if ingested. 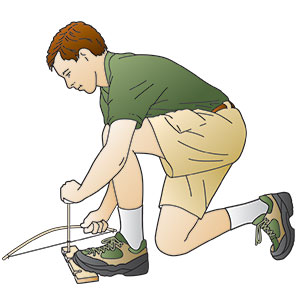 The bow-and-drill fire-starting method relies on friction to create heat. To start a fire this way, you’ll need a bow, spindle, hand block and fireboard. You can create all of this from wood you gather.

Wrap the bowstring, which can be a shoelace, around the spindle so it spins when you move the bow. Whittle a notch into the fireboard for the spindle to fit into; you’ll place your tinder beneath the notch.

Hold the spindle steady with a hand block, and begin quickly moving the bow back and forth to spin the spindle.

The friction from the spindle should create a spark in your tinder, which you can blow on to ignite into flames.