At 10,000 Feet, Scouts Adjust to Backpacking in the Mountains 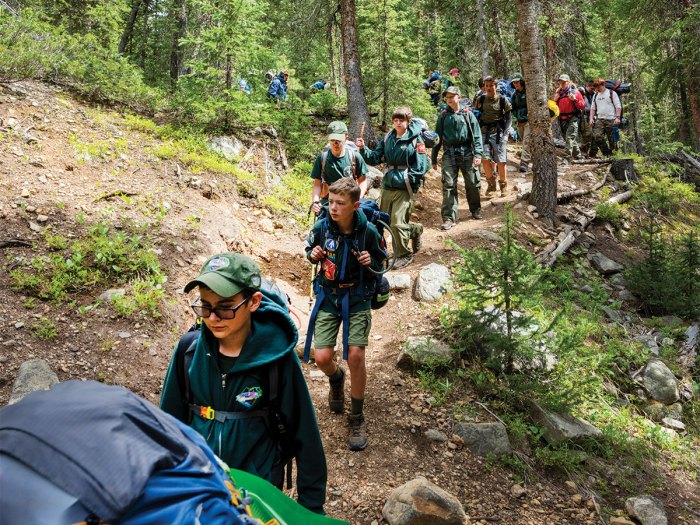 It’s 3 a.m. when Austin Reeves wakes up to a rustling noise. Whatever is making the noise sounds big. Really big. And it’s getting closer.

“It sounded like it was right outside my tent,” the 12-year-old Second Class Scout says. “I was pretty sure it was a bear. I woke up my tent buddy. We were freaking out, because we didn’t know what to do.”

Austin thinks he hears the bear’s flaring nostrils sniffing around the boys’ tent. Suddenly, he remembers a tip he learned earlier in the week for warding off bears. He reaches into his backpack and pulls out his dad’s metal mess kit he’d borrowed for the trek. With the kit’s pot in one hand and pan in the other, he feverishly clangs them together.

“It was really loud,” Austin says. “I could barely hear anything.”

He doesn’t stop until the handles break off both the pot and pan. Then he listens. Silence.

He emerges from the tent and spots the large tracks. Yes, a bear had wandered into Troop 321’s campsite.

The overnight encounter added to an already exciting trip for the guys from Long Beach, Mississippi. 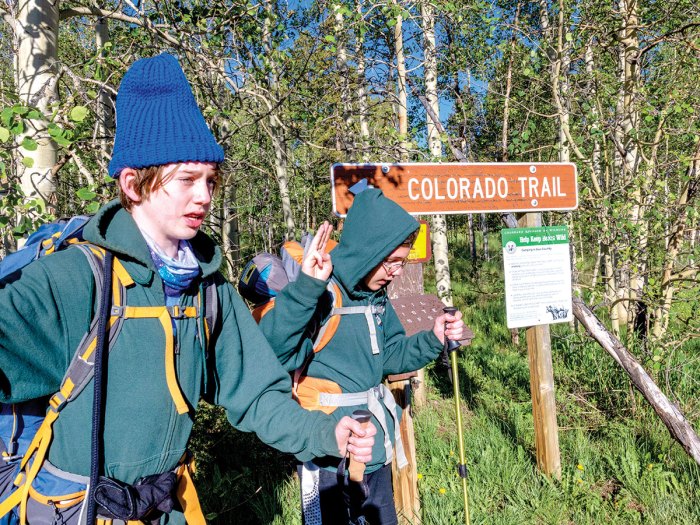 Troop 321 traveled to Colorado for a weeklong 32-mile backpacking trek across the Continental Divide last June. The Continental Divide is a natural boundary stretching from Alaska to the southern tip of Chile in South America. It separates river flows between the Atlantic and Pacific Oceans. Some of its tallest points reside in Colorado.

Hiking at 10,000 feet presented quite a challenge for the Scouts who live almost at sea level.

“We were excited, but we were anxious,” 12-year-old First Class Scout Jacob Smagur says. “This was out of our comfort zone. The highest we had hiked was part of the Appalachian Trail. We were four times higher in Colorado.” 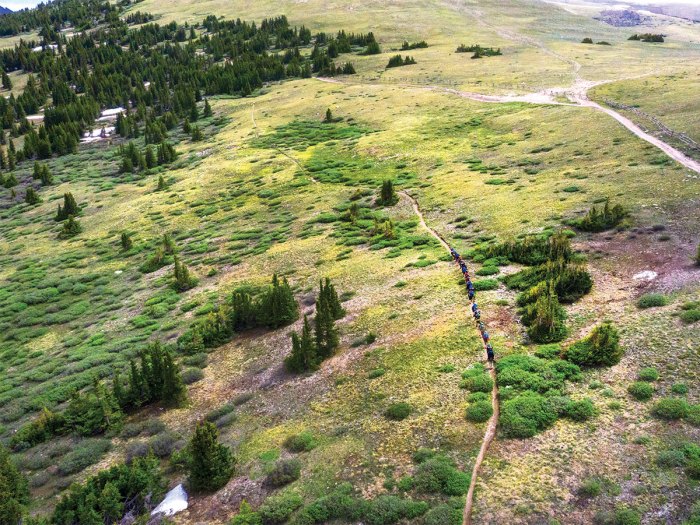 When you live nowhere near such an elevation, you have to improvise your training. Scouts prepared by climbing stairs in parking garages and going on a practice hike. Because of the COVID-19 pandemic, Scouts were screened before the trip and wore masks in public places.

Another altitude precaution was not hitting the trail the day they arrived in Colorado. Instead, they allowed their bodies to adjust to the change in elevation by camping at an RV park for a couple of days.

Altitude sickness can quickly sap your energy, give you a headache and make you puke. Some complications can be fatal, so the Scouts took it slowly.

“The first day we started hiking, it was very hard to breathe,” says First Class Scout Addison Carroll, 12. “Walking with a 40 pound pack made it harder to breathe.” 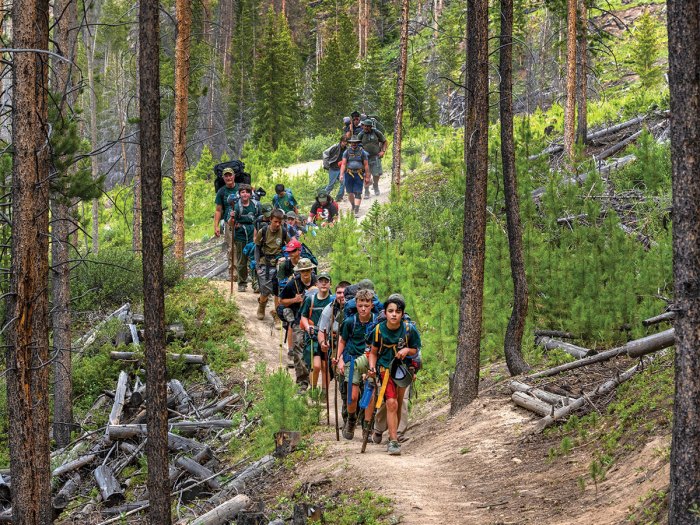 For hiking uphill, the Scouts used a “caterpillar” hiking technique. The method allowed them to frequently catch their breath without having to stop and wait for stragglers.

“We start off in a line, then the leader takes 10 paces and then steps off the trail,” 13-year-old Star Scout Lucas Santiago says. “After everybody passes, they get in the back of the line. Then the person in front does the same, and so on and so on.” 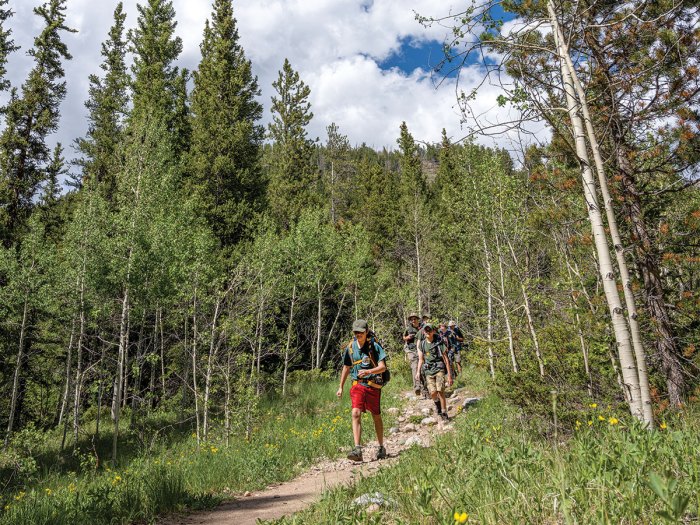 Taking more frequent, shorter breaks also helped the group maintain a steady pace, even if it turned out slower than some Scouts would’ve liked. The physical demands combined with the gradual progress created some unhappy campers. That is, until they saw their first small patch of snow.

“I’ve never seen real snow before,” Addison says. “It was even crazier to see it in June. For us, that was madness.”

Some Scouts had visited the mountains before on family vacations or even lived in Colorado briefly, but for many of these southern Scouts, this presented a new experience. They played in the snow for at least 15 minutes before picking up their packs again, and they wanted to stop at every snow patch they found afterward to play some more. 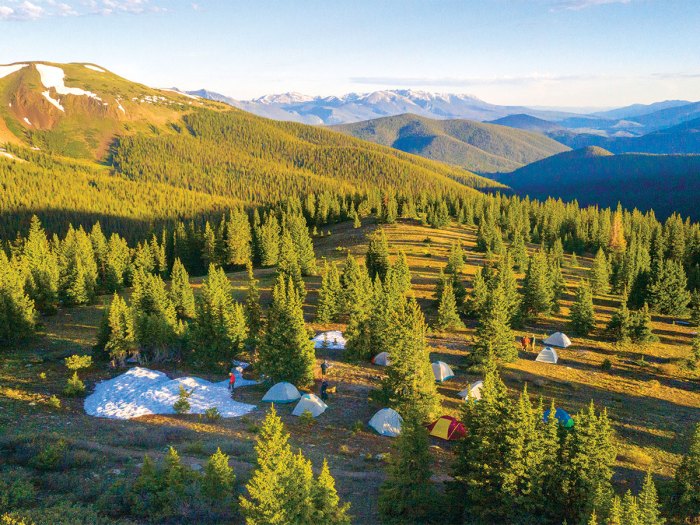 “Boiling snow takes a lot longer than you think,” Lucas says. “I scooped up the snow, and then I had to filter out the pine needles. It was 30 or 40 minutes by the time I had water in my water bottle.”

Despite the frustrations, the trek was rewarding overall. For most of the troop that backpacked across the divide, nicknamed the “Divide Walkers,” those rewards came from the fantastic mountain views. At night, the Scouts could gaze down on the twinkling lights of a distant town. 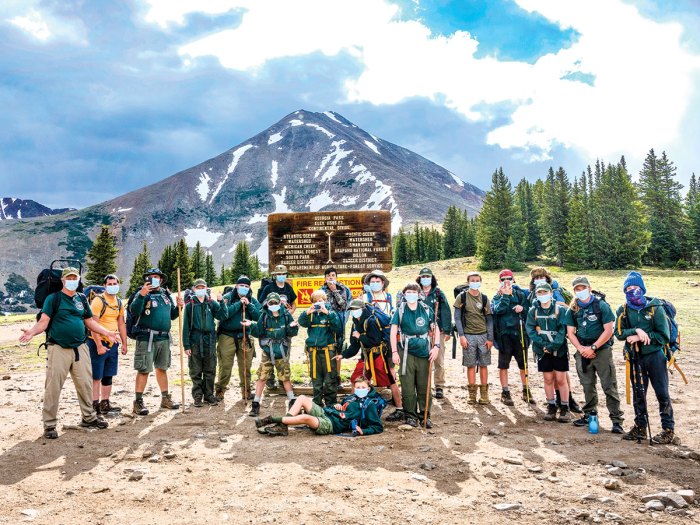 A few Scouts who hiked part of the trail and then trekked back to the RV park, nicknamed the “Cave Explorers,” toured the Cave of the Winds and rode on a zip line at a nearby park. They also visited a dinosaur fossil museum and checked out the towering sandstone formations at the Garden of the Gods in Colorado Springs.

“It was very fun. I enjoyed it a lot,” says First Class Scout Christopher Spicer, 12. 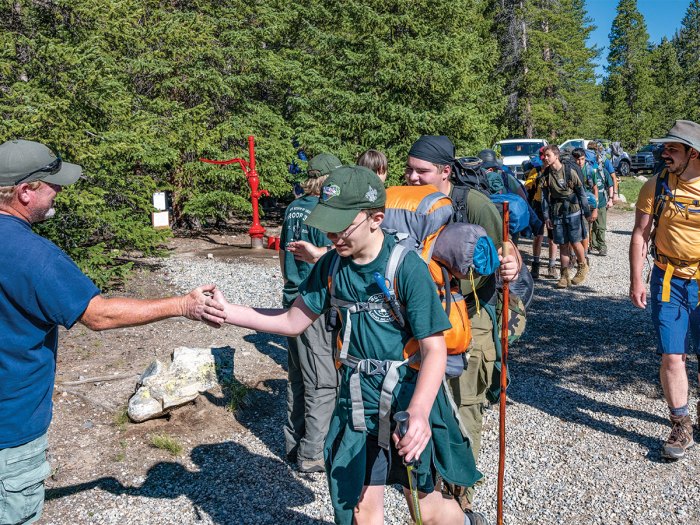 The Cave Explorers group greeted the Divide Walkers as they finished their mountain journey. Together, the Scouts enjoyed a pizza dinner and a trip to an Old West museum before heading home.

“I felt like I had done something,” Addison says. “I’ve done a big hike before when we did 50 miles of the Appalachian Trail. Now I can say I hiked at 10,000 feet.” 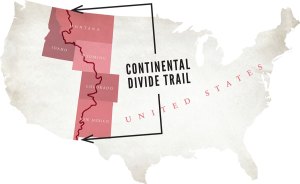 If you want to hike across part of the Continental Divide, there are five states where you can do it: Colorado, Idaho, Montana, New Mexico and Wyoming. A scenic trail system stretches across those five states, totaling 3,100 miles.

It crosses deserts, grassy plains, mountains and national parks, including Yellowstone and Glacier.

The trail is longer than the Appalachian, which measures 2,190 miles, and the Pacific Crest, which is 2,650 miles long. The longest scenic trail in America is the North Country, at 4,600 miles.

WHEN IN BEAR COUNTRY

The bear that wandered into Troop 321’s campsite was most likely a black bear, since they live in most states.

Whenever you are camping where bears live, properly store your “smellables,” including food, trash and toiletries, away from your campsite. However, a bear might still check out your campsite.

If one does, stay calm, stand your ground and wave your arms. Yell at the bear or make loud noises to scare it away, but don’t imitate bear sounds or make high-pitched squeals — to a bear, those might sound like a wounded animal.

IN MEMORY OF DOUG CAPPS

Troop 321 Scoutmaster Doug Capps, who accompanied the unit on the Continental Divide trek, passed away in December due to complications of COVID-19 (contracted after the trip). The troop asked that we proceed with telling this story. 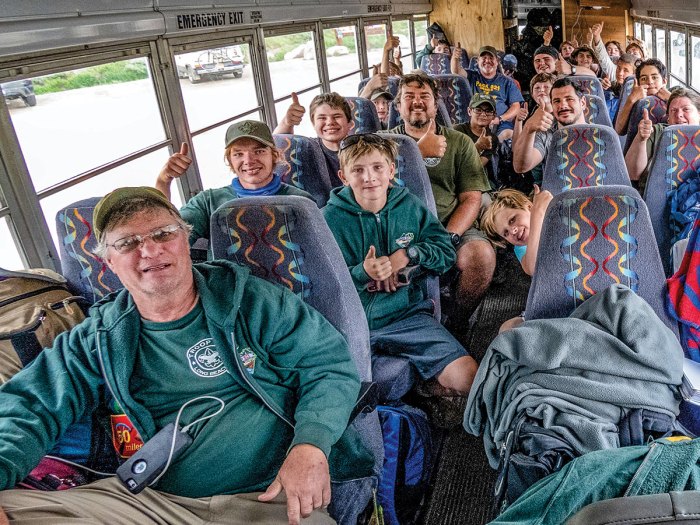